This is a great tank for the current $250 price tag, though at this stage in development, isn't worth the $350 (yet!). I'll start with the pros, go into the problems I had with it, and then move into some subjective gripes/suggestions, here we goooo
---
First off, It's surprisingly sturdy for how light it is! I was afraid that even though it was advertised as light, that it was still going to be kind of cumbersome when moving it while assembled. But no, I can pick it up and move it with ease and no extra help! And once it's all together there's minimal buckling.

It was easy and fast to assemble! Everything was pretty straight forward and it only took maybe 15 minutes or so. And it's just as easy to break down if you need to transport it longer distances.

Also it keeps in heat (Though also moisture..) pretty well, depsite it being so spacey!
---
Now onto the problems I had, pretty much right out of the box...
It arrived here somewhat beat up... Albeit mostly cosmetic for me. The bottom piece came dented, the acrylic substrate guard had cracks and chips on the edges, and one of the the doorknobs is loose due to the screw not being able to go all the way into the knob. Thankfully the dent isn't extreme and the cracked acrylic can be hidden in the railway that the piece fits into. (Though I'm unsure if this could effect its ability to contain loose substrate since I use tile.)

I also really think the instructions need to be rewritten, as, even though it's fairly simple to assemble, there were still times where I wanted to turn to the instructions and they were no help. at all. Definitely need to go more into detail.

Just a couple more things, this pertaining to the protective peel-off film. I feel like all of the pieces should have had a layer on BOTH sides, as some pieces only had one side protected. And as for the film of the bottom of the tank, I don't really know how you expected people to fully remove it, as even trying as hard as I could to grip and pull out from under the framework, it still tore and left some of the film under the frame and it's a pain to try and get ahold of now.

Now for the personal gripes about it for the sake of suggesting:

I feel that it needs mounting/support bars like the Zenhabitat has for internal lighting mounting. I haven't really found a way to mount my UVB internally without sticking it on the wall. And I and most likely a lot of people like to have it more centered, mounted to the ceiling. Though if there are ways to do it I'd be totally open to listen!
I'd be cool if the substrate guard could be optional so people with non-loose substrate can have the doors completely to the floor of it, for if I'd want my beardie have ease of access to the outside sometimes. But I understand that I'm the minority here lol.
Also, In my opinion the black background is a little too depressing I think? I feel like it should be a little more inviting? I know you can just buy a background if you want something interesting, but considering the fact that traditional cling backgrounds aren't a good option for opaque tanks, as hanging it on the inside can pretty much guarentee damage, and some people can't spend $150-$200 on a 3D background, I can figure that a majority of people are going to be using this tank with no background. And I feel like it'd be nice to have a less drab background color or maybe even patterned?
Also I'm hoping at some point you'll sell a stand to accompany it, that'd be cool!

Overall, though it might seem like I'm coming off pretty negative, I actually Do like it! and as it stands it's very promising! which is why I went so into detail to voice my criticism, since I know you guys are looking to make improvements! This is going on suuuuper long, but now I feel like I've said all I needed to say! I appreciate the opprotunity of this good deal while you guys are working out the kinks, keep it up guys!

Hi Damon!
Thank you very much for your review! A lot of good suggestion and gave us more points to consider. We are working on the improvements along with add-on items such as backgrounds and light fixtures etc. For the damaged parts, we will reach out to you once we have them arrived!
Sincerely!

Love the enclosure and my beardie is doing well with it. My only issue was one of the corner connecting pieces was cracked bad so I had to improvise to complete the frame setup. The other thing is the acrylic doors don't always align when closing them and the knobs don't secure all the way and it is a bit irritating at times. Overall I love it, price was great and the material is made of are cool beans. Soooo thanks for a great enclosure.

We’ve recently introduced our bearded dragon, Godzilla, into our family and he loves them!!!!!

My beardie loves these. It’s the one treat he never gets tired of and is excited to let me hand feed him 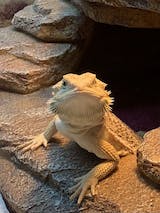 The cage is great don’t get me wrong although, I did run along some troubles of setting it up. One of my boards came with a huge bend in the middle of it, one of the door knobs won’t fit securely, the substrate shield came chipped at the bottom, and getting the film off of the base board was a little bit of a pain(pics below). All in all the tank does it’s purpose for my bearded dragon. She went from a 75 to this and she appears to love the new space. It holds moisture very well so if you’re like me, and has a water container in your desert animals cage, you’ll want to buy a small dehumidifier for their cage as I woke up and my humidity was above 50%! I do have two other 4x2x2 cages on their way from different brands and I feel as if they’ll be a little more better then is. 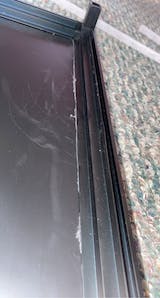 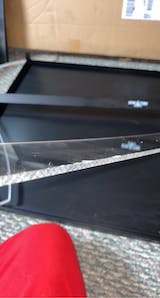 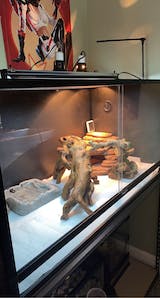 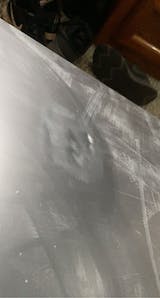 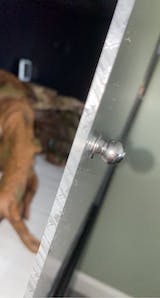 Hi Kyra,
Thank you very much for the feedback! This is our first batch and thank you for pointing out these issues for us to improve! In the coming months, we will have parts available for replacement, so for these you mentioned, we will contact you and ship them to you as soon as we have them.
Sincerely!

The cage is great don’t get me wrong although, I did run along some troubles of setting it up. One of my boards came with a huge bend in the middle of it, one of the door knobs won’t fit securely, the substrate shield came chipped at the bottom, and getting the film off of the base board was a little bit of a pain(pics below). All in all the tank does it’s purpose for my bearded dragon. She went from a 75 to this and she appears to love the new space. It holds moisture very well so if you’re like me, and has a water container in your desert animals cage, you’ll want to buy a small dehumidifier for their cage as I woke up and my humidity was above 50%! I do have two other 4x2x2 cages on their way from different brands and I feel as if they’ll be a little more better then is.

Both of my dragons love these!

Symton makes it convienient to have a standing order. I have fresh live and active BSFL every week, all of my animals love them and I love how healthy and packed with calcium they are!

This enclosure arrived 10 days ago, very simple to put together (20 minutes or less) and clean. Sliding doors make it nice to access the inside. This also seems very easy to take apart to move to another location. Very light weight in design. I hope to enjoy this with my bearded dragon for years to come.

Great lightweight enclosure at an affordable price. Easy to assemble. Highly recommend assembling where you want the enclosure to be placed in your home as it can be a little tricky to move after it’s built. Plexiglass sliding doors do scratch when rubbing against one another or if your reptile scratches at or stands up on sliding doors. All in all, this is a great enclosure for the price.

My bearded dragon loves these things. I used to do cricket from a local pet store and he’d barely eat. I think that’s partially because he was lazy. As soon as I started giving him these he eats normally and is so happy. They always come in near packaging and 98% of them are alive as expected. I love the subscription option it makes feeding my baby so much easier.

This enclosure was more than I expected. It was easy to set up. I love that it came with the mallet! After testing the heat and humidity, this enclosure holds up well!! It holds heat much better than glass enclosures. I also love the fact that it has a mesh top so that I still can use the T5 and not worry about having to hang it or the heat lamp inside. This gives for extra climbing space if needed. I definitely recommend.

I'm so happy with the quality of the black soldier fly larvae I get from Symton. They also have amazing customer service. In my opinion, these are better than any other BSFL I've bought in the past, including Phoenix Worms.

Symton has the absolute BEST BSFL’s. Mine have always been shipped quickly. They arrive alive and they’re fat and healthy. Our beardies gobble them up. Oh and last but not least! The substrate is AWESOME! They make it so easy to separate the grub and I don’t even need to rinse!

They are light weight but sturdy. They are definetly worth $250-$300 but think their normal price of $350 would be a bit much considering what's its made out of. But over all a good enclosure for desert reptiles for sure.

The BSFL I received are large and fat, my little beardie is in heaven!! Thank you for a quick shipment, I am thankful to find a supplier in Texas! I will be a repeat customer! 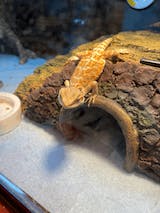 I placed my first order of 1,000 large larvae and they were a lot smaller than I expected. They were not anywhere close to the size on the picture above. I bought large larvae from a different supplier and they were a lot bigger. I've read many positive feedbacks about SYMPTON but I was disappointed with my first order. I will give it one more try.

Wonderful variety of buggies for both my Bearded Dragons!! I love it! I did pay for 2-day shipping as since COVID and weather hit there always can be delivery delays I was worried about them arriving alive. All of the buggies arrived alive!! I love the concept behind the flight of feeders. My spoiled boys like a variety and this has been the best idea ever! Great feeders! Great minds!! Thank you Symtom!

The past two shipments of 1,000 Large BSFL I have received haven't looked like the Large I'm used to getting. They seemed much smaller, which in turn is less protein for my beardie. I'll give it one more try.

My beardie is a very picky eater and I was afraid she’d ignore preserved bugs. Not so. When she sees these in the dish she leaps out of her hammock and gobbles them up. I keep them on hand along with preserved crickets for those times in winter when it is too cold to ship live feeders. Would be great for travel too!